I’ve been playing quite a bit of Touhou Project’s Immaterial and Missing Power, and it is quite the addictive fighting game.  Most of the other Touhou project games are bullet-hell shooter games.  I’m kinda not so great at fighting games or bullet-hell games.  There’s an English patch, but you don’t really need it to play the game unless you want to follow the story.

As to why I find it so addicting: The music and the gameplay.  Really, I love Touhou project music in general, and there are a couple of interesting differences from most of the fighting games I’ve played.  For instance, this game places heavy emphasis on projectiles, but limits their use by making them consume spirit.  To counter a massive number of enemy projectiles, you can either obliterate them with your own, or much better, neutralize them by landing a hit on your enemy.  Doing so will change her projectiles into spirit to replenish your own bar.

I play almost exclusively as Marisa.  She moves fairly quickly and has a mix of attacks useful against both characters specializing in close range and long range combat.  Also, she’s adorable.  ADORABLE.  My battles with Alice, screenshots below, tend to be pretty one-sided, but this is not the case with most other characters, especially Remilia Scarlet. If you are intested, you can download a demo from the game’s site or read more about it and it’s gameplay on the Touhou Wiki. 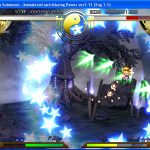 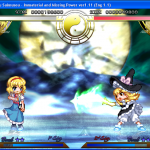 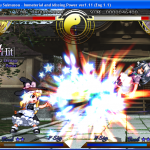 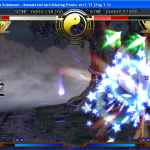 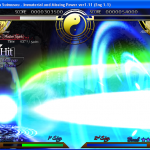